At Pierce Mortuary Colleges, we have an experienced and committed Executive Team, led by President and CEO, Don Madelung. Pierce Mortuary Colleges is dedicated to fulfilling and integrating its mission into all aspects of our academic program, campus life, and external relations. Under their combined oversight, the Colleges retain its sharp focus on academic achievement, administrative excellence, impactful funeral service education, and continued commitment to student success. The Executive Team ensures that these principles govern our priorities and influence our strategic allocation of resources. 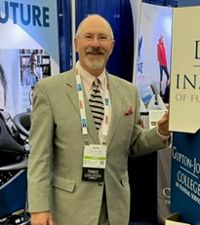 Effective May 11, 2021, Don Madelung was appointed by the Board of Directors to be the President and CEO of Pierce Mortuary Colleges, Inc.

Mr. Madelung leads the PMC groups comprised of three non-profit colleges located in Decatur, GA, Dallas, TX and Jeffersonville, IN. The colleges have enjoyed unprecedented growth in the last 6 years. Mr. Madelung’s vision of expanding the admissions and Marketing for the colleges saw a jump in enrollment in 2017 by 65% and has averaged over 24% each year since. Don has created an Executive Group comprised of the VP of Operations, the CFO and the Nat’l Director of Education and training. Mr. Madelung also created the President’s council comprised of the executive group and the campus presidents. The goal is Student Success and updates have included the addition of the Wonderlich test for admissions in January 2021 and efforts to increase the NBE test scores.

Governor Scott Walker appointed him to serve on the Midwestern Higher Education Compact (2011-) as well as the Higher Education Approval Board (2011-), which he is the chair. Mr. Madelung has served on the Board of Directors for the Association of Private Schools and Universities, Washington, D.C.; was appointed by former Governor Doyle to sit on the Council for Workforce Investment; served as president and chair of the Board for the Madison Metropolitan School Districts Business & Education Partnership; served as president of the Wisconsin Council for Independent Education and provides leadership to a wide variety of civic and non-profit agencies. Mr. Madelung received his B.A. degree from Augustana College, Rock Island, IL, and his M.A. from the University of Missouri Kansas City with high honors.